Perioperative cardiac complications can manifest as heart attacks, better referered to as perioperative myocardial infarctions (PMI). PMIs can be caused due to unstable coronary plaques (type 1 MI) secondary to the release of catecholamines in surgeries such as abdominal or inguinal surgeries that incur massive blood loss, accompanied by hemodynamic instability and coronary vasoconstriction, or an imbalance between myocardial oxygen supply and demand (type 2 MI).

Defining and detecting perioperative myocardial infarctions (PMI) is often difficult because most PMIs occur without symptoms given the anesthetized or sedated patient conditions post surgery, and ECG changes are often subtle and/or transient.

Traditionally, studies looking at perioperative cardiac complications have focused on myocardial infarction (MI), defined as myocardial necrosis due to myocardial ischemia and clinically diagnosed by elevated troponins in the setting of ischemic symptoms or electrocardiogram (ECG) findings.  However, in the perioperative setting, many patients sustain myocardial injury without meeting the criteria for MI [1].

MINS has been defined in the recent universal MI definition[3] as a prognostically relevant postoperative troponin level elevation during or within a period of 30 days after non-cardiac surgery with:

While postoperative serum cardiac troponin concentration has recently been accepted as a strong predictor of 30-day mortality after noncardiac surgery [4][5], preoperative cardiac troponin concentrations have also been shown to be associated with postoperative outcomes [6]. In a retrospective cohort of 12,415 noncardiac surgical patients with preoperative hs-cTnI below the 99th-percentile upper reference limit and above the LOD, the threshold at which the risk of mortality increased corresponded to a preoperative hs-cTn I ≥ 12 ng/L[7]. In other words, patients with certain preoperative hs-cTnI above the LOD and below the 99th-percentile URL had greater 30-day mortality after non-cardiac surgery.

Considering the 1 in 33 hospitalizations for non-cardiac surgeries attributed to major adverse cardiac and cerebrovascular events, cardiovascular management of patients undergoing non-cardiac surgeries constitutes an area of widespread clinical interest. While there exists a recognized void for the treatment of MINS, several strategies directed at prevention and disease-modification of perioperative MINS have been suggested. While there is major utility in the implementation of hs-cTn as a “rule-out” pathway for PMIs, combination of pre and post monitoring could yield early intervention and clinical management strategies that reduce mortality in at risk patients. 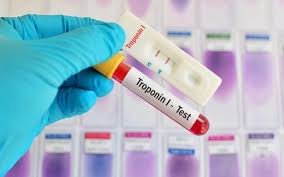 Various cases in the hospitalization of patients with elevated Troponins have revealed certain false positives and false negatives with current lab assays in the measurement of cardiac Troponins, a biomarker